The island of Elba

Its central and southern position on the Island of Elba makes Lacona an ideal place from where to reach every part of the island. Going eastwards, the visitor comes first to the plain of Marina di Campo and then to the granite complex of Mount Capanne, the chestnut woods and the characteristic villages of San Pietro and Sant'Ilario. From April until October 31 a cableway provides access to the mountain peak, at a height of 1,019 meters, which commands a view of the whole Island, the islands of the Tuscan Archipelago, Corsica and, on very clear days, Sardegna.
Northwards lies Portoferraio (9 km), where the most important sea links with the mainland are concentrated, as well as a great number of services and facilities, museums, theatres, libraries, etc. Situated eastwards is the picturesque village of Capoliveri (on the peninsula of Calamita) and Porto Azzurro. Beyond these landmarks lie the rest of the eastern side of the island (Rio Elba and Rio Marina), less touristic but extremely charming.

The territory of Elba
The island is geographically situated on the co-ordinates 42° 47' 12'' latitude north and 10° 16' 28'' longitude east of Greenwich. Covering a total of 224 sq. km, the Island of Elba is the third largest island of Italy, and lies at a distance of just over 5 miles from the mainland (30-60 minutes by ferryboat). From east to west, the island measures a maximum of 27 km (from Capo Pero to Punta Nera), while from north to south it measures 18 km (from Capo Vite to Punta dei Ripalti).

Coastlines
Considering its size, the Elba coastline is remarkably developed, with 147 km of coast, over 70 well-known beaches and a host of little bays, inlets and tiny beaches. Altogether, the beaches cover a distance of 17,126 metres, of which 7,908 metres are sand, 3,510 shingle and 5,708 mixed.

Climate
The climate is particularly mild. The average temperature in the Summer is 22.7° C, while the annual average is 15.7° C. In the course of the year there are approximately 168 fine days, 88 variable and 109 cloudy; rain is concentrated mainly in the Winter months.

Minerals
The rocks of the Calamita peninsula are 4-500 million years old and form a part of a fragment of the African coast. The Elban museums of 'Tonietti' at Rio Marina and 'Ricci' in Rio nell'Elba house examples of the 150 kinds of Elban minerals (1/20th of the entire world collection), including iron (magnetite, limonitem haematite, ilvaite and pyrite) , copper (malachite, cuprite, chrysocolla and azurite), pegmatites (beryl, tourmaline, quartz and orthoclase), etc. The minerals of Elba are of such exemplary importance that UNESCO has added the mineral areas of the Island to the temporary list of World Heritage geological sites.

The flora
The Mediterranean climate has greatly influenced the development of plant life on the island, the main part of which are evergreen. Vegetation includes woods of oak and holm-oak, cluster pines (Pinus pinaster), cultivated pines (P. pinea) and Aleppo pines (P. halepensis). Widespread also are the cork-tree (Quercus suber), the yew (Taxsus boccata) and the hophornbeam (Oystra carpinifolia). Where the landscape is not characterised by woodlands, it is covered with Mediterranean scrub, an expanse of strongly-scented vegetation reaching a height of 2-5 metres.
The plants of the Mediterranean scrub include arbutus (Arbutus unedo), lentisk (Pistacia lentiscus), myrtle (Myrtus communis), Phoenician juniper (Juniperus phoenicea), heather (Erica arborea and Erica scopario), lavender (Lavandula stoechas), rosemary (Rosmarinus officinalis), rock roses (Cistus incanus and others) and brooms (Spartium junceum and Calicotome spinosa).
Of exceptional beauty are the cornflowers of Mount Capanne (Centaurea ilvensis), the Corsica violet, lemonscented evergree (Limonium ilvae), the St. John lily (Lilium bulbiferum croceum) and the wild orchid.
At the Hermitage of Santa Caterina in Rio nell'Elba are the botanic gardens 'Orto dei Semplici', specialising exclusively in medicinal plants. There are several such gardens on the island - which could itself, indeed, be considered one enormous and wonderful 'botanic garden'.

The fauna
Especially interesting is the butterfly 'Coenonympha elbana', the pine marten (Martes martes) and the beech marten (Martes foina), the mouflon (Avis musimos), the wildcat (Felis silvestris), the native hare (Lepus europaeus) and the door-mouse (Myoxus glis). The island being part of that wonderful migratory bridge between Europe and Africa, it is common to see the endless flocks of migrating birds flying overhead. Moreover, Elba is an ideal nesting spot for all birds typical of the Mediterranean region, which find in the Mediterranean scrub and other similar ecological niches their natural habitat.
The birds which frequent the island include the kestrel (Falco tinnunculus, Falco eleonorae), Pernis a. apivorus, the sparrowhawk (Accipiter nisus), the herring gull (Larus argentatus), the red partridge (Alectoris r. rufa), the wall creepers (Tichodroma muraria), the Hydrobates p. pelagicum and the grey heron (Ardea c. cinerea). Especially interesting is the fact that Elba is also the nesting place of the pilgrim falcon (Falco peregrinus brookei), the fastest of all birds of prey. There are also colonies of the rare Corsican seagulls (Larus audouinii).

The sea
The archipelago of Tuscany is the largest marine park of Italy. The great variety of sea-floors and coastlines present in the archipelago determine its characterising biological diversities. The sandy floors are covered with extremely beautiful marine 'forests'; the coral areas, meanwhile, are real centres for a condensation of marine life. The seas of the archipelago and the Island of Elba are inhabited by innumerable species, including lobsters, morays, groupers, dentex fish, bass, gilthead, etc. More difficult to spot, but nevertheless widespread, swordfish, moonfish, dolphins 'Delphinus delphis" and the bottle-noses "Tursiops truncatus', which can be seen off the coast of the islands. Here also it is possible to see, especially in Spring and in Autumn, razorbacks (Balenoptera physalis) and sperm-whales (Physeter macrocephalus).
The Aquarium of Elba, at Marina di Campo (3 km from the Laconella campsite), houses approximately 150 different species of Mediterranean sea life.

For detailed information on the environment of the Island of Elba and the Archipelago of Tuscany, visit the website of the Tuscan Archipelago National Park Association.

Architecture
Stone objects testify to the fact that the Island of Elba was inhabited by primitive man; the Archaeological Museum of Marciana contains documented evidence that the presence of man on the island dates back to the mid-Palaeolithic and Neolithic Periods.
Known to the ancient Greeks as Aethalia and to the Romans as Ilva, Elba appears in the works of Pliny, Aristotle and Virgil. The architectural history of the island represents the different populations and cultures which have succeeded one another through the centuries.
The Etruscans were the first to exploit the iron mines, and have left much evidence of their presence on the island (remains of necropolises, tombs, and the villages of Monte Castello, Monte Fabrello, Castiglione di Campo and Castiglione di San Martino); the Romans built luxurious villas, such as those of Linguella, Grotte (built on a promontory of the same name) and Capo Castello (Cavo).
In the year 1800, during Pisan rule, the fortresses of San Giovanni, Marciana and Volterraio were erected. Later to settle on the island were Neapolitans, Genoese, and the families of Borgia and Appiani. In this period were constructed Forte Falcone and Forte Stella. The Spanish subsequently added their contribution with the fortresses of Porto Longone, Forte San Giacomo and Forte Focardo. Visiting the Palazzina dei Mulini and the Villa of San Martino, it is possible also to see traces of the presence of Napoleon in Elba.
The island, therefore, has a great deal to offer also in the way of architectural wealth.

Art and culture
On the island there are two active theatres - the Vigilanti Theatre and the Linguella Theatre. There is also a local library (the 'Foresiana' in Portoferraio) and several museums (the Napoleonic Villas of 'San Martino' and 'I Mulini', the Archaeological Antiquarium Museum of Marciana, the Mineral Museum of Rio Marina, the Linguella Archaeological Museum of Portoferraio and the Open Air Museum and Art Center of Italo Bolano, also in Portoferraio). The island has six open air cinemas for the Summer and tho cinema (Portoferraio and Marciana Marina) open all year round.

Events
Organised every year on the island are:


Gastronomy
In Elba visitors can enjoy the very best of Mediterranean food. The island's cooking tradition, in fact, is characterised by its sumptuous fish dishes ('cacciucco', or fish soup, boiled octopus, rice with sepia, 'sburrita', fish broth, stuffed squid, etc.) but also by certain vegetable dishes, such as the typical 'gurguglione'.
Traditional desserts include 'schiaccia briaca', 'schiaccia' with dried figs, 'corollo', 'sportella' and various others.
The wines include the Elba red and white, as well as the famous Aleatico, an inimitable ruby-red dessert wine.

The vast majority of Elban restaurants specialise in fish dishes; however, all are ready to cater to those who desire also, or only, other types of food.

Roads
The whole island is connected by asphalt roads. There are several cart-roads which are passable by car. The island is also covered by a rich network of footpaths, cared for by the National Park of the Tuscan Archipelago.
The Island of Elba may be visited by car, motorcycle, bicycle and on foot. For those not in possession of their own vehicle, there are many car rental services as well as a bus service, running several times daily on each section. 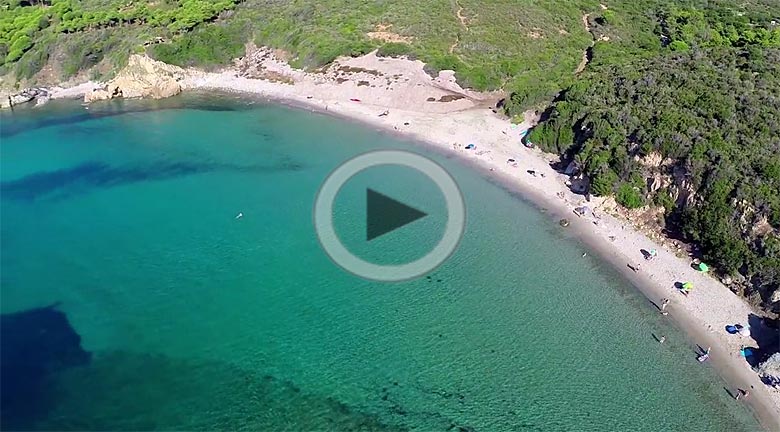